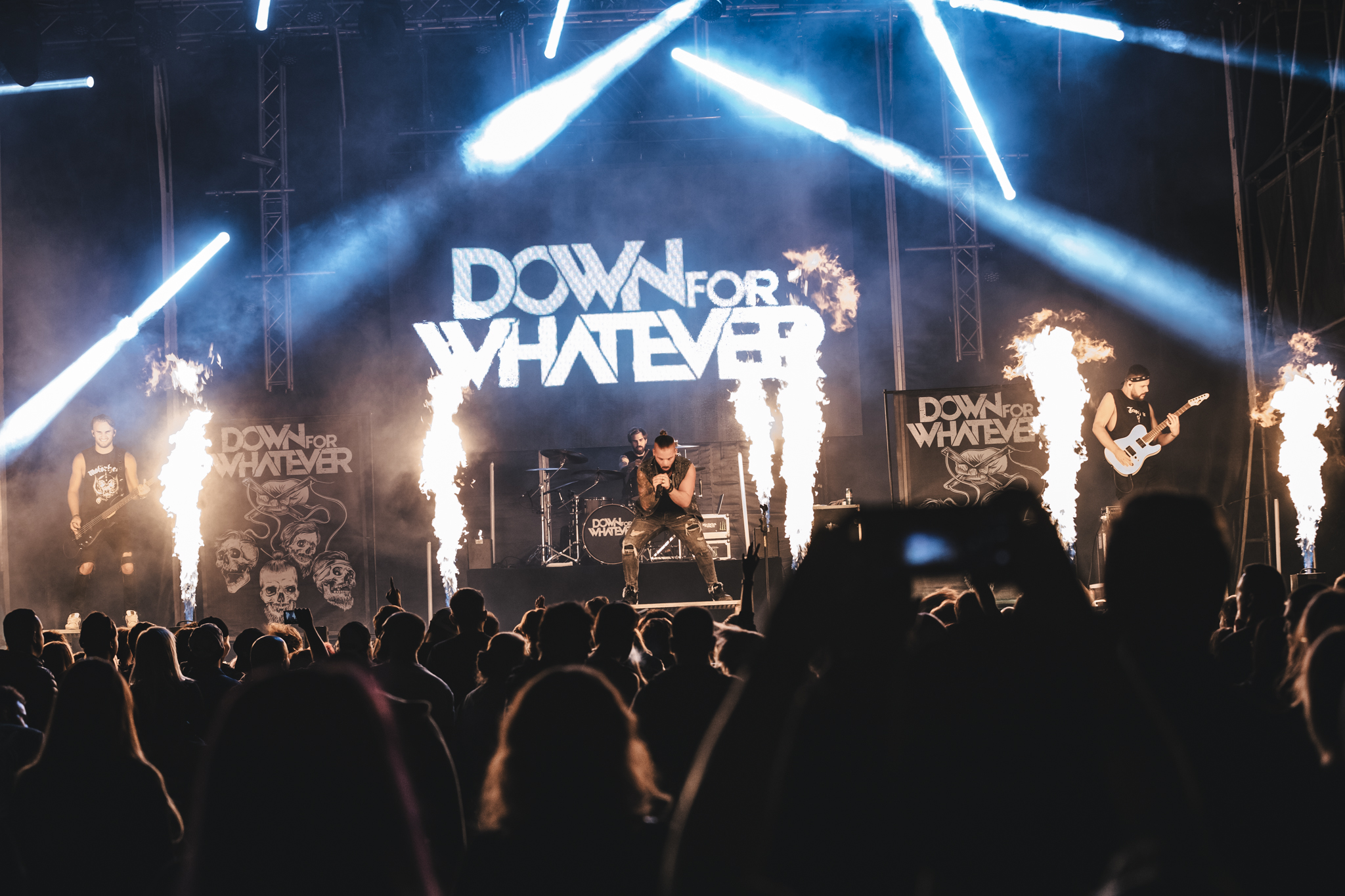 10 Tips For Playing Live In A Band

Whether you’re an established artist with hundred of gigs under your belt, or a new band looking for your first gig, perfecting a live music performance can be nerve-racking and challenging. Today I share my essential tips and tricks to make sure that you get the best out of all your live shows. 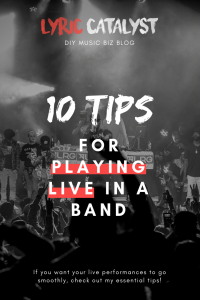 1. Plan on your setlist carefully

While this may seem insignificant, it can have a major effect on your ability to play as well as the audience’ overall engagement. Consider the energy and vibe of your songs and try to space out your most energetic songs throughout the set. You can write down when you’re going to speak to the audience and even exactly what you’re going to say, too.

Pro tip: don’t crack inside jokes while performing with audience members that you know personally, because it alienates those who don’t know you.

If you’re a singer don’t be embarrassed to go into the bathroom and do your funny vocal warm-ups. It is way more embarrassing to sound rusty on stage than to be caught singing “Bella Signora” by the bar staff.

3. Engage with your audience

Engaging with your audience during you are performing live will allow you to connect with them on a deeper level.

It’s like giving them an open invitation to your world while performing on stage. The more engaged your audience is with your performance, the more energy there is from the crowd. You and your band can work off this energy to give an even more incredible performance.

Having the right outfits for your performance can be very good for your stage presence.

I’m not saying you have to go out and have matching costumes but having outfits that compliment the overall theme you are going with for your performance will add to your show.

Also if you and your other band members have outfits that fit well with each other, it could help with the overall group synergy.

Make sure the outfits you all decide to wear are appropriate for the venue you are performing at while still maintaining the image you want your group to display.

It’s an element that some bands tend to forget about because they are so focused on performing.

Remember that performing live isn’t just about the music, you also have to keep in mind how you can be visually appealing to your audience.

Avoid embarrassing slip-ups such as forgotten lyrics or bad notes by practicing as much as possible. Ideally, you want each song to become ingrained in your muscle memory so that you don’t have to think about it musically or struggle with it physically. This will also allow you to concentrate on your stage presence and feeling the vibe of the room.

This is an area that a lot of musicians don’t always think about, but is one that should be taken seriously. How you set your own stage volume will contribute to the overall sound in the venue and the clarity of your band. Keep in mind that how you choose your levels should be determined by the room, the quality of the P.A., and the balance you’re trying to achieve on stage – with all of those factors collectively being taken into account.

If you’re too loud, you’ll blow away your band mates and make it harder to get a proper mix out front. Too low, and folks on stage won’t be able to hear you (unless they have you in their monitor) and the engineer will need to boost you in the house.

You always want to work with the rest of the band and the sound man when it comes to your stage volume. As a musician, pretty much everyone’s top priority is that they’re able to hear themselves. But always remember to consider the big picture with your overall volume.

This subtitle should speak for itself, but if it doesn’t send a clear message, here are the bullet points for why this should be a priority:

If you’re picking songs that are directed primarily at guys, you won’t have as many girls around. And that won’t do your band any good. Even if there are songs that you don’t necessarily like to play in your band; if a lot of women will like them, then it’s a probably a good idea to include those tunes in your show.

Your goal as a musician in a cover band is to make sure that people are spending money. The more ladies there are in the room, and the more they are having a good time, the more drinks the bar will sell. This will lead to your band getting booked more often, and subsequently more money to put in your own pocket.

8. Play to the people in the room

There will be times during your musical career when you’re playing a gig and not a whole lot of people show up. It can be disheartening and discouraging, especially if you’ve put a lot of work into your band. But it’s all part of the job, and it’s in your best interest to never let things like that get you down, and to focus on putting forth your best efforts for the people that actually are there…even if it’s only the staff. It will do your band a world of good to act as if the room is packed, so that when you’re playing a gig where that is the case, you’ll be ready for it.

There are several advantages to having a permanent record of your gigs:

Nowadays it’s easy to capture audio and video of just about anything. If you really want to go for it, good quality video cameras are very affordable.

If you’re not recording your performances, I guarantee that there will be fantastic moments that you experience that you’ll wish weren’t only just a memory.

10. Always prepare for an encore performance

You did it! You made it to the end of your show and you gave a spectacular performance that everyone loved. Everyone is ready to get off stage and relax for the rest of the night, then all of sudden you hear the crowd chanting,

Your amazing performance has left the crowd wanting more! This is great and all but if you have nothing prepared for an encore, it can be a complete nightmare. Always be prepared to give an encore performance because you’ll never know when you’ll be asked to. Don’t stress too much about it and have some fun songs prepared for your encore. This could also be the last opportunity for you to engage with your audience. Try to get the crowd involved with your encore performance. End on a high note and don’t forget to thank everyone again for being an amazing crowd.

Hopefully you’ve found these tips useful, and remember that the most important thing is to have a good time!

No comments to show. 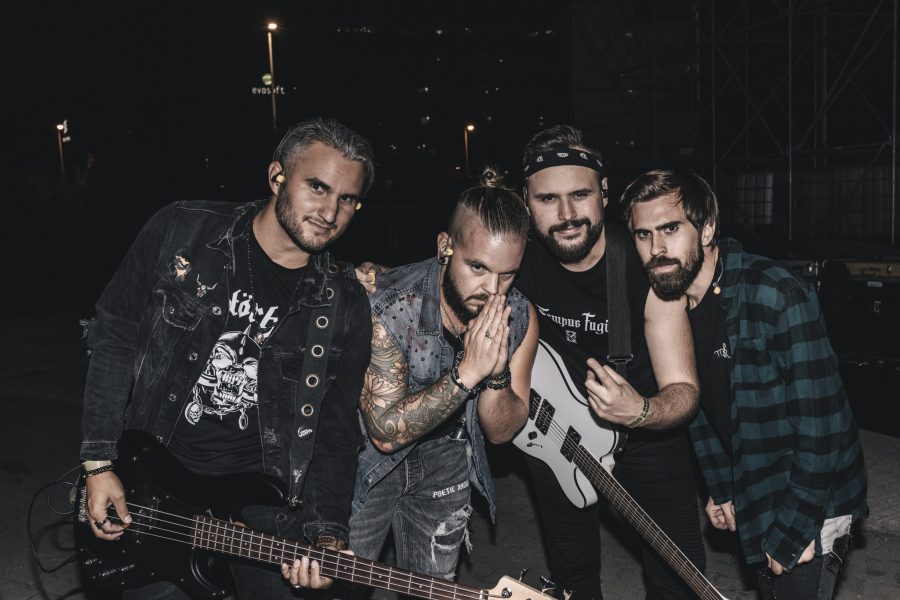 How to Avoid Getting Scammed in the Music Industry

How to Make Your Band More Visual and Win the Internet

Close Menu
We use cookies on our website to give you the most relevant experience by remembering your preferences and repeat visits. By clicking “Accept All”, you consent to the use of ALL the cookies. However, you may visit "Cookie Settings" to provide a controlled consent.
Cookie SettingsAccept All
Manage consent

This website uses cookies to improve your experience while you navigate through the website. Out of these, the cookies that are categorized as necessary are stored on your browser as they are essential for the working of basic functionalities of the website. We also use third-party cookies that help us analyze and understand how you use this website. These cookies will be stored in your browser only with your consent. You also have the option to opt-out of these cookies. But opting out of some of these cookies may affect your browsing experience.
Necessary Always Enabled
Necessary cookies are absolutely essential for the website to function properly. These cookies ensure basic functionalities and security features of the website, anonymously.
Functional
Functional cookies help to perform certain functionalities like sharing the content of the website on social media platforms, collect feedbacks, and other third-party features.
Performance
Performance cookies are used to understand and analyze the key performance indexes of the website which helps in delivering a better user experience for the visitors.
Analytics
Analytical cookies are used to understand how visitors interact with the website. These cookies help provide information on metrics the number of visitors, bounce rate, traffic source, etc.
Advertisement
Advertisement cookies are used to provide visitors with relevant ads and marketing campaigns. These cookies track visitors across websites and collect information to provide customized ads.
Others
Other uncategorized cookies are those that are being analyzed and have not been classified into a category as yet.
SAVE & ACCEPT